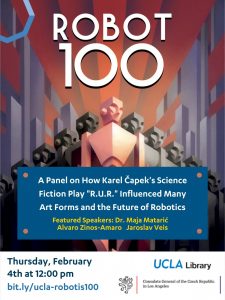 On behalf of the International Studies at the UCLA Charles E. Young Library, I am delighted to invite you to attend a webinar entitled:

The Consulate General of the Czech Republic in Los Angeles and the UCLA Library coordinated this virtual panel discussion “Robot is 100!” exploring the influence of the sci-fi play – “R.U.R.” on many art forms and the future of robotics.

Learn more about the future of artificial intelligence with distinguished Professor of Computer Science, Neuroscience, and Pediatrics at USC and the founding director of the USC Robotic and Autonomous Systems Center Ms. Maja Matarić, and two established science fiction writers Mr. Alvaro Zinos-Amaro and Mr. Jaroslav Veis, who will discuss the heritage of Karel Čapek’s revolutionary play R.U.R.

The online panel will be moderated by the Czech Consul General Amb. Jaroslav Olša, Jr. who is also an editor of numerous anthologies of science fiction including ROBOT100, a collection of stories by primarily Czech writers inspired by R. U. R.

To further explore more on this topic, please visit the UCLA Library’s virtual exhibit Robot is 100! Karel Čapek’s R.U.R. and the Robot in Pop Culture.

You can get more information about Karel Čapek’s life and R.U.R. in a complementary UCLA Library Research Guide.

Enjoy an audio created by the BBC Sounds: “The Robots are Us.” This BBC Radio Documentary features, among other scholars, Jesse Brown O’Dell, PhD. graduate from the UCLA Department of Slavic, East European and Eurasian Languages and Cultures.

This program is co-sponsored by the UCLA Department of Slavic, East European and Eurasian Languages and Cultures.

Registration is required. To receive the link to join, please register here:

Maja Mataric´– Chan Soon-Shiong Distinguished Professor of Computer Science, Neuroscience, and Pediatrics at USC, founding director of the USC Robotics and Autonomous Systems Center and interim Vice President of Research at USC. Her PhD and MS are from MIT, BS from the University of Kansas. She is Fellow of AAAS, IEEE, and AAAI, recipient of the US Presidential Award for Excellence in Science, Mathematics & Engineering Mentoring from President Obama, the Anita Borg Institute Women of Vision Award, NSF Career Award, MIT TR35 Innovation Award, and IEEE Robotics and Autonomous Systems Early Career Awards.  She has a long history of being active in K-12 STEM and diversity outreach. A pioneer of socially assistive robotics, her team’s research is developing personalized human-robot interaction methods for convalescence, rehabilitation, training, and education that have been validated in autism, stroke, Alzheimer’s, healthy elderly, and many other domains (robotics.usc.edu/interaction/).  She is also co-founder of Embodied, Inc.

Alvaro Zinos-Amaro  Alvaro is a Hugo and Locus finalist with some forty stories published in professional magazines and numerous anthologies, including Analog, Galaxy’s Edge, Lightspeed, Beneath Ceaseless Skies, Nature, and volumes such as The Year’s Best Science Fiction & Fantasy, Cyber World, The Mammoth Book of Jack the Ripper Stories, Humanity 2.0, This Way to the End Times, Shades Within Us, The Unquiet Dreamer: A Tribute to Harlan Ellison, 18 Wheels of Science Fiction, Overruled!, It Came from the Multiplex, and Seasons Between Us (forthcoming). Alvaro’s Rhysling-nominated poetry has appeared in markets like Apex and Star*Line, while his more than one hundred reviews, essays and interviews have been published in venues like Clarkesworld, Locus, Tor.com, The Los Angeles Review of Books, Strange Horizons and Foundation.

Jaroslav Veis is a much sought-after Czech journalist, freelance writer, scriptwriter, translator and editor. He attained his degree in Journalism at the Charles University, Faculty of Social Sciences and Journalism. As a science fiction enthusiast, he is the author of five sci-fi short story collections published in a time span of more than four decades, starting with “Experiment pro třetí planetu” (Experiment for the Third Planet, 1976), and translated a wide range of authors, such as Isaac Asimov, Brian W. Aldiss, etc. He also writes essays on science, some of which were collected in “How the World Holds Together (“Čím drží svět pohromadě“)”, which he co-wrote and edited. He wrote TV scripts for “Futuroskop I, II,” a Czech TV series on science, technology and history of inventions.

Veis was also an Editor-in-Chief of one of the most recognized Czech newspapers Lidové noviny, and served as the Editor of Fiction of another popular Czech newspaper Mladá fronta. Between 1993-94, he was a Fellow at the Nieman Fellowship at Harvard University. He also served for over a decade as the Chief Advisor to the President of the Senate of the Parliament of the Czech Republic. He widely publishes on politics, and among his many achievements are the translations to Czech language, for example a book of Thomas L. Friedman’s “The World is Flat” and Fareed Zakaria’s “In Defense of a Liberal Education.”