A Conversation Followed by a Q&A Session

Joanna Stingray is an author and musician from Los Angeles, California, who lived for many years in Russia. In 1984, while touring in the Soviet Union, she met and befriended Boris Grebenschikov, a revered musical poet (who many Soviets called the ‘Russian Dylan’) and soon became the first American producer of underground Russian rock n’ roll when she released the double album Red Wave — 4 Underground Bands from the U.S.S.R., a compilation of music smuggled out of the U.S.S.R. by Joanna in 1985. A frequent traveler in and out of Russia, Joanna was interrogated by the KGB and FBI (both thought she was a spy) and in 1987, she became an enemy of the State — her visa blocked to keep her from entering the Soviet Union to marry Leningrad guitarist Yuri Kasparyan. After months of intervention by the U.S. State Department, she returned to Russia, married Yuri and in the early ‘90s became a television host, a recording artist, and well known rock personality throughout Russia. She has published several books in Russia about her time in the music scene as well as much of her photo collection. Her video diaries and interviews of bands and their musicians is the only archive of this clandestine, bygone world.

Interview with Joanna Stingray in LA Review of Books:

Red Wave: An American in the Soviet Music Underground

Joanna Stingray’s inspiring and poetic memoir, written with her singer/songwriter daughter Madison, introduces Western audiences to the legendary musicians of Soviet rock through her improbable Cold War heroics as a young New Wave musician who, in 1985, produced Red Wave: 4 Underground Bands from the USSR with music by her new friends that she had smuggled to the West. This is her incredible testimony of youthful fortitude and rebellion, her love story, and proof of the power of music and youth culture over stagnancy and oppression. 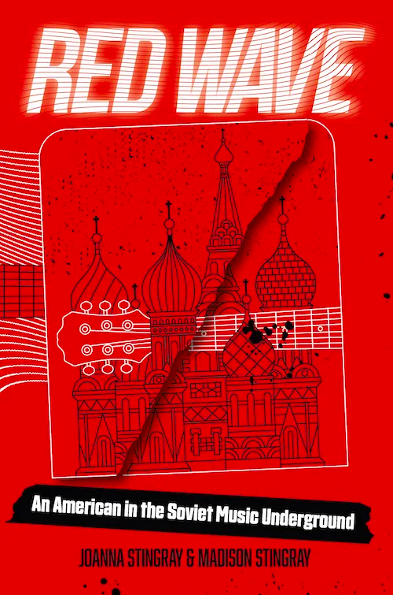 Rock is for young people. It’s an opportunity to open up a road into the future and breathe deeper. And all thoughtful people understand that it’s not just young people fooling around. They are captivated by this music. If some of our rock bands like Aquarium and Kino were released in the West on the Red Wave album in June 1986, why shouldn’t they have been released in Russia?

– President Mikhail Gorbachev, 2019, reflecting on his decision that led to the Red Wave bands being allowed to become “official” by 1987