Skip to main content
Home » Events » Whites and Reds: A History of Wine in the Lands of Tsar and Commissar

Whites and Reds: A History of Wine in the Lands of Tsar and Commissar 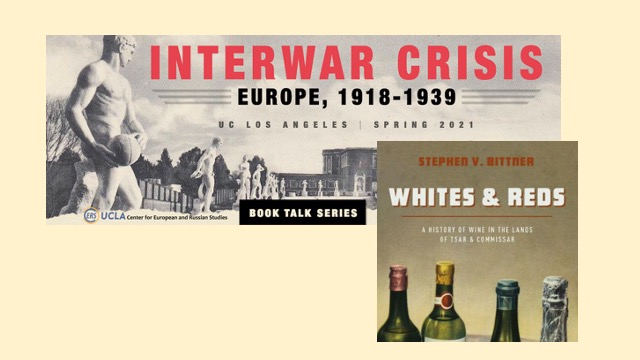 CLICK HERE TO REGISTER
** After registering, you will receive a confirmation email containing information about joining the Zoom webinar. Please note, you will only be able to join the webinar at the specified time and date.

Whites and Reds: A History of Wine in the Lands of Tsar and Commissar tells the story of Russia’s encounter with viniculture and winemaking. Rooted in the early-seventeenth century, embraced by Peter the Great, and then magnified many times over by the annexation of the indigenous wine economies and cultures of Georgia, Crimea, and Moldova in the late-eighteenth and early-nineteenth centuries, viniculture and winemaking became an important indicator of Russia’s place at the European table. While the Russian Revolution in 1917 left many of the empire’s vineyards and wineries in ruins, it did not alter the political and cultural meanings attached to wine. Stalin himself embraced champagne as part of the good life of socialism, and the Soviet Union became a winemaking superpower in its own right, trailing only Spain, Italy, and France in the volume of its production.
Whites and Reds illuminates the ideas, controversies, political alliances, technologies, business practices, international networks, and, of course, the growers, vintners, connoisseurs, and consumers who shaped the history of wine in the Russian Empire and the Soviet Union over more than two centuries. Because wine was domesticated by virtue of imperialism, its history reveals many of the instabilities and peculiarities of the Russian and Soviet empires. Over two centuries, the production and consumption patterns of peripheral territories near the Black Sea and in the Caucasus became a hallmark of Russian and Soviet civilizational identity and cultural refinement. Wine in Russia was always more than something to drink.

ABOUT THE AUTHOR
Stephen V. Bittner is Professor of History at Sonoma State University. He is the author of The Many Lives of Khrushchev’s Thaw: Experience and Memory in Moscow’s Arbat and the editor of Dmitrii Shepilov’s memoir, The Kremlin’s Scholar: A Memoir of Soviet Politics under Stalin and Khrushchev.

ABOUT THE DISCUSSANT
Brian J. Griffith is the inaugural Eugen and Jacqueline Weber Post-Doctoral Scholar in European History at University of California, Los Angeles. His interests include modern Europe, modern Italy, Fascism, consumerism, (trans)national identities, and the digital humanities.

ABOUT THE SERIES
Interwar Crisis: Europe, 1918-1939 is the public facing, student authored weblog of a modern European history course which is being taught by Dr. Brian J Griffith at University of California, Los Angeles during the Spring 2021 quarter (March 29-June 11, 2021). The course, which shares the same name as this Open Access volume, explores the various political, economic, social, and cultural upheavals which took place in Europe between the two world wars, and asks its participants to consider the various parallels between developments during the 1920s and 1930s and today’s international community.

Cost : Free and open to the public. Registration required at above link.